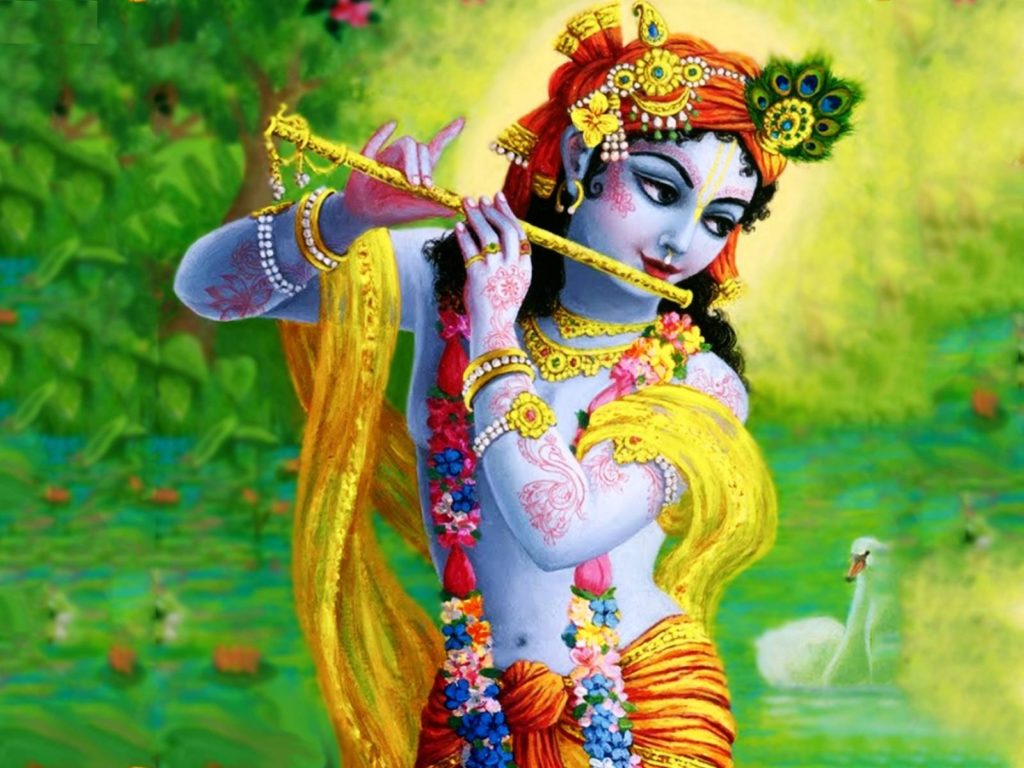 The Deity of Lord Krsna playing His flute.

The songs and lyrics contained here are expressions of consciousness of God, the universe and man’s real goal of life. The upliftment of peace and prosperity, success, self realization, fulfillment, and all spiritual recognition that life in its real sense has to offer. Here is a link of the first song.

A song to Mother Earth to appease Her.

Srila Prabhupada writes, “The planet earth is also called vasundharā. The word vasu means “wealth,” and dharā means “one who holds.” All creatures within the earth fulfill the necessities required for human beings, and all living entities can be taken out of the earth by the proper means. As suggested by the planet earth, and accepted and initiated by King Pṛthu, whatever is taken from the earth—either from the mines, from the surface of the globe or from the atmosphere—should always be considered the property of the Supreme Personality of Godhead and should be used for Yajña, Lord Viṣṇu. As soon as the process of yajña is stopped, the earth will withhold all productions—vegetables, trees, plants, fruits, flowers, other agricultural products and minerals. As confirmed in Bhagavad-gītā, the process of yajña was instituted from the beginning of creation. By the regular performance of yajña, the equal distribution of wealth and the restriction of sense gratification, the entire world will be made peaceful and prosperous. As already mentioned, in this age of Kali the simple performance of saṅkīrtana-yajña—the holding of festivals as initiated by the International Society for Krishna Consciousness—should be introduced in every town and village. Intelligent men should encourage the performance of saṅkīrtana-yajña by their personal behavior. This means that they should follow the process of austerity by restricting themselves from illicit sex life, meat-eating, gambling and intoxication. If the intelligent men, or the brāhmaṇas of society, would follow the rules and regulations, certainly the entire face of this present world, which is in such chaotic condition, would change, and people would be happy and prosperous.”

The earth is our beautiful home that Krsna The Supreme Personality of Godhead provided. It is described in the Vedic literatures, that Lord Vishnu, an expansion of Lord Krsna, breathes out millions of universes and living entities to produce the material world, which is just one quarter of the entire kingdom of God. The Srimad Bhagavatam gives this information in much more detail. In each universe, there are three levels of planetary systems. These are the heavenly realm the highest, the intermediary or middle realm and the lowest or hellish realm. The intermediate planetary systems are where many planets like this earth exist. The earthly planets houses human beings like us. There are eight million, four hundred thousand species of life forms, of which there are four hundred thousand species of human beings. The human species are not completely like us but are within the category of human beings, meaning the living entities within that body are given special intelligence to ask about and seek out God, and the various questions like, Who am I? What is this life about? What and how this world is made and by whom? etc etc arise naturally. Other lower life forms, these questions do not occur within them. Their questions and activities however are ones concerning eating, sleeping, mating and defending. We humans act in this way as well. But if we do not ask of life’s mysteries, then we are no greater than the animals.

Human life is a very rare opportunity. It is described in the Vedic literatures that human life is especially meant for realizing God. The demigods living in the heavenly planets can also realize God, but because their lifestyle is so opulent and comfortable, and the fact that they live for hundreds of thousands of years as compared to human life, they sometimes tend to enjoy life without thinking of God. In this way their life style can be a form of deterrent to God realization. In the hellish planetary systems, the living beings there are the complete opposite to heavenly life. They suffer extreme torture due to their sinful activities while in the human form of life. They do not remember any thing of God. In this way heavenly life and hellish life are deterrents to God consciousness. The Srimad Bhagavatam describes that the living beings in the heavenly planets, must take birth again, especially those who had forgotten God to a great extent, on the earthly planets as human beings. Those in the hellish planets are given opportunities to again climb the ladder of the eight million, four hundred thousand species of life. This means according to the level of sins committed in their last human birth, will have to take birth among the lower species of life like plants and animals life right down to the lowest life forms like worms in stool and mud. When they have completed this climb back up to the highest animal form of a cow, at their death they again enter into the human forms of life on one of the many earthly planets, somewhere in the intermediary planetary system. One such earthly planet is our earth planet. It is therefore a very rare opportunity to take birth as a human being on this earth.