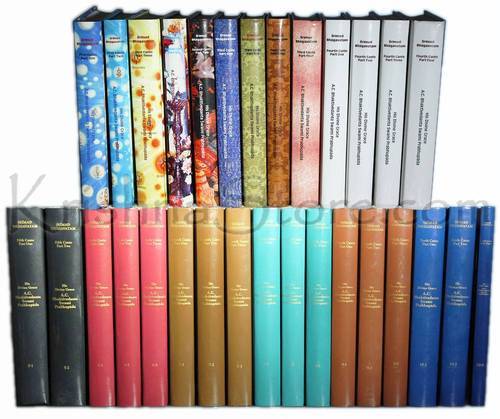 The songs and lyrics contained here are expressions of consciousness of God, the universe and man’s real goal of life. The upliftment of peace and prosperity, success, self realization, fulfillment, and all spiritual recognition that life in its real sense has to offer. Here is a link of the second song.

The knowledge that brings one nearer to the Supreme Personality of Godhead, Kṛṣṇa

Mantra One: Everything animate or inanimate that is within the universe is controlled and owned by the Lord. One should therefore accept only those things necessary for himself, which are set aside as his quota, and one should not accept other things, knowing well to whom they belong.

Mantra Two: One may aspire to live for hundreds of years if he continuously goes on working in that way, for that sort of work will not bind him to the law of karma. There is no alternative to this way for man.

Mantra Three: The killer of the soul, whoever he may be, must enter into the planets known as the worlds of the faithless, full of darkness and ignorance.

Mantra Four: Although fixed in His abode, the Personality of Godhead is swifter than the mind and can overcome all others running. The powerful demigods cannot approach Him. Although in one place, He controls those who supply the air and rain. He surpasses all in excellence.

Mantra Five: The Supreme Lord walks and does not walk. He is far away, but He is very near as well. He is within everything, and yet He is outside of everything.

Mantra Seven: One who always sees all living entities as spiritual sparks, in quality one with the Lord, becomes a true knower of things. What, then, can be illusion or anxiety for him?

Mantra Eight: Such a person must factually know the greatest of all, the Personality of Godhead, who is unembodied, omniscient, beyond reproach, without veins, pure and uncontaminated, the self-sufficient philosopher who has been fulfilling everyone’s desire since time immemorial.

Mantra Eleven: Only one who can learn the process of nescience and that of transcendental knowledge side by side can transcend the influence of repeated birth and death and enjoy the full blessings of immortality.

Mantra Twelve: Those who are engaged in the worship of demigods enter into the darkest region of ignorance, and still more so do the worshipers of the impersonal Absolute.

Mantra Fourteen: One should know perfectly the Personality of Godhead Śrī Kṛṣṇa and His transcendental name, form, qualities and pastimes, as well as the temporary material creation with its temporary demigods, men and animals. When one knows these, he surpasses death and the ephemeral cosmic manifestation with it, and in the eternal kingdom of God he enjoys his eternal life of bliss and knowledge.

Mantra Fifteen: O my Lord, sustainer of all that lives, Your real face is covered by Your dazzling effulgence. Kindly remove that covering and exhibit Yourself to Your pure devotee.

Mantra Sixteen: O my Lord, O primeval philosopher, maintainer of the universe, O regulating principle, destination of the pure devotees, well-wisher of the progenitors of mankind, please remove the effulgence of Your transcendental rays so that I can see Your form of bliss. You are the eternal Supreme Personality of Godhead, like unto the sun, as am I.

Mantra Eighteen: O my Lord, as powerful as fire, O omnipotent one, now I offer You all obeisances, falling on the ground at Your feet. O my Lord, please lead me on the right path to reach You, and since You know all that I have done in the past, please free me from the reactions to my past sins so that there will be no hindrance to my progress

The original Sanskrit verses of Sri Isopanishad were translated into English by His Divine Grace A.C. Bhaktivedanta Swami Prabhupada.

Chaitanya Charitamrita (The sweet nectarine pastimes of Lord Chaitanya Mahaprabhu. (An incarnation of Lord Krsna appeared on this planet just over 500 years ago)

What Are The Vedas?

Dear Inquirer,
I thank you very much for your interest.
Since you would like to know more about the temple, the worshipers and the scriptures, I beg to inform you that this Krsna consciousness movement is based on the Vedic scriptures. Veda means knowledge, and there are two kinds of knowledge, one mundane and another transcendental. The Vedas are considered to be originally transcendental because they come from the platform which existed before the creation. This transcendental knowledge was impregnated in the heart of the first created living being, and then he distributed the knowledge both for material and spiritual purposes.

This Vedic knowledge was stated in the Atharva-veda. Later on, just at the beginning of this millennium, the Kali-yuga, Vyasadeva, who is the supreme authority on Vedic knowledge, considering the degraded condition of men in this age, divided the whole Veda into departmental knowledge, and some of his disciples were entrusted with the particular departments. In this way the entire Vedic knowledge was developed into four Vedas, then 108 Upanisads, 18 Puranas, and then summarized in Vedanta-sutra. And then again, to benefit the less intelligent class of men like women, workers, and the degraded descendants of the higher class, Vyasadeva made a fifth Veda, known as Mahabharata, or the great history of India. 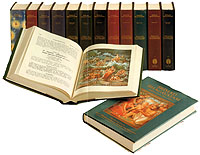 The living entities within this material world are understood to be rebellious conditioned souls who disregarded the order of the Supreme Lord and thus lost their spiritual kingdom. It is something like Milton’s idea of Paradise Lost. This material world is created, developed, and maintained; it produces many by-products, then gradually dwindles, and at last it is dissolved or annihilated. The spirit souls or living beings are by nature eternal. This condition of life for the living beings, namely, to go through repeated births and deaths, is unnatural for them. Therefore the entire Vedic knowledge is designed to regulate the life of the living entity, not in the animal form of life, but in the human form of life, so that he can fulfill his material desires but at the same time become elevated to his original spiritual position. This process of evolution from the lowest aquatic life up to the stage of brahminical culture is deliniated in the Vedas. This is called knowledge, and when one is liberated from the material contamination, the same knowledge, further advanced, becomes transcendental knowledge.

This process of elevating oneself from different platforms of understanding to the highest status of life is called religion. According to the Sanskrit language, religion is not a kind of faith, but it is a prescribed form of duty to be discharged by the respective divisions of human society, ultimately rising to the platform of Krsna consciousness or God consciousness. The first-class religion, therefore, is that which teaches love of God because religion means to understand one’s position in relationship with God.

This God realization also depends on three phases of life. When God realization is there, distinguished from material realization, this is called the liberated stage of transcendental enlightenment. The next stage is to realize God everywhere in His localized aspect, and the highest stage of God realization is to know Him as the Supreme Person–all-powerful, full of all riches, all reputation, all beauty, all wisdom, and all renunciation.

For further understanding of this religious process, I would recommend that you read our three books, namely Sri Isopanisad, Bhagavad-Gita As It Is, and Easy Journey to Other Planets. When you have finished them, you can read Srimad-Bhagavatam and Teachings of Lord Caitanya. Besides these we have many other books and our Back to Godhead magazines, in which we fully describe this religion only. So please read them one after another, and whenever there is a question you may write to me, and I shall be very glad to answer you as far as possible.