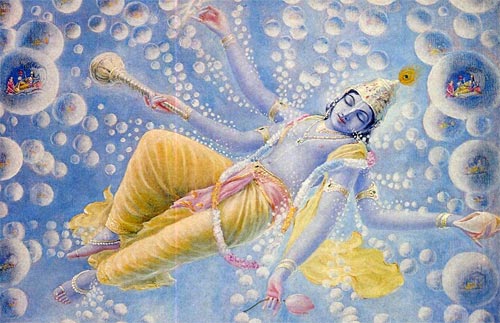 The songs and lyrics contained here are expressions of consciousness of God, the universe and man’s real goal of life. The upliftment of peace and prosperity, success, self realization, fulfillment, and all spiritual recognition that life in its real sense has to offer. Here is a link of the fourth song.

The Supreme Lord said, The indestructible, transcendental living entity is called Brahman, and his eternal nature is called the self. Action pertaining to the development of these material bodies is called karma, or fruitive activities. BG. Chapter 8 Text 3

In Vedic literature the living entity is called jivatma and Brahman, but he is never called Parabrahman. The living entity (jivatma) takes different positions—sometimes he merges into the dark material nature and identifies himself with matter, and sometimes he identifies himself with the superior spiritual nature. Therefore he is called the Supreme Lord’s marginal energy. According to his identification with material or spiritual nature, he receives a material or spiritual body.

In material nature he may take a body from any of the 8,400,000 species of life, but in spiritual nature he has only one body. In material nature he is sometimes manifested as a man, demigod, an animal, a beast, bird, etc., according to his karma. To attain material heavenly planets and enjoy their facilities, he sometimes performs sacrifices (yajna), but when his merit is exhausted, he returns to earth again in the form of a man.In the process of sacrifice, the living entity makes specific sacrifices to attain specific heavenly planets and consequently reaches them. When the merit of sacrifice is exhausted, then the living entity descends to earth in the form of rain, then takes on the form of grains, and the grains are eaten by man and transformed into semen, which impregnates a woman, and thus the living entity once again attains the human form to perform sacrifice and so repeat the same cycle. In this way, the living entity perpetually comes and goes on the material path. The Krsna conscious person, however, avoids such sacrifices. He takes directly to Krsna consciousness and thereby prepares himself to return to Godhead.

Impersonalist commentators on the Gita unreasonably assume that Brahman takes the form of jiva in the material world, and to substantiate this they refer to Chapter Fifteen, verse 7, of the Gita. But this verse also speaks of the living entity as “an eternal fragment of Myself.” The fragment of God, the living entity, may fall down into the material world, but the Supreme Lord (Acyuta) never falls down. Therefore this assumption that the Supreme Brahman assumes the form of jiva is not acceptable. It is important to remember that in Vedic literature Brahman (the living entity) is distinguished from Parabrahman (the Supreme Lord).